The term ‘natural capital’ is a metaphor describing nature: a stock of capital which yields a flow of ecosystem services (everything from crops and water, to flood protection and pollination, to opportunities for recreation). This resort to an economic metaphor can cause problems, but as Daija Angeli explains, the concept of natural capital resonates with decision makers.

Scotland’s Natural Capital Asset Index (NCAI) is an example of a tool which utilises the terminology. Designed to track changes in the condition of Scotland’s nature (see graph below), the NCAI shows how natural capital can be considered alongside other forms of capital (human, manufactured, social). The NCAI provides evidence that Scotland’s overall stock of natural capital declined between 1950 and the 1980s, but has stabilised over the past 25 years. To what extent was the decline caused by economic growth? Why has it stabilised in recent years? How can we improve nature in Scotland? Answers aren’t certain, but we hope that the NCAI reinforces our appreciation that every economic system is connected to – indeed is wholly reliant upon – a prosperous environmental system. 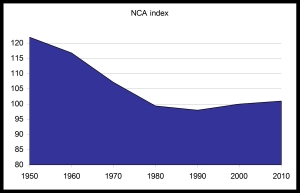 Another question that a new group is striving to answer regarding the NCAI is whether we’re measuring the right thing: how confident are we that the indicators used to compose the NCAI reflect the condition of natural capital assets? Our understanding of quite what we need to measure has advanced in recent years, not least because of the work of the UKNEA and the Natural Capital Committee. We are currently refining the NCAI’s methodology, and will release an update in 2015.