Natural Capital – what would Eugene Odum have made of it?

Natural Capital – what would Eugene Odum have made of it?

Professor Des Thompson, Principal Adviser on Biodiversity in Scottish Natural Heritage reflects on the progress made in our understanding of Natural Capital since the early days of understanding how ecosystems function. 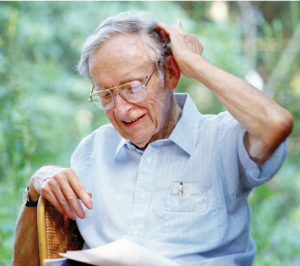 Just over sixty years ago a textbook was published which arguably revolutionised our understanding of how ecosystems function. Fundamentals of Ecology (1953), written by Eugene and Howard Odum, set out quite brilliantly how we should think of ecology operating over a great range of spatial and temporal scales. A masterpiece of beautiful prose, with diagrams delving into energy flows and nutrient cycling, this book effectively ran with the baton handed on by Sir Arthur Tansley, who first coined the term ‘ecosystem’ in 1935.

Recorded in 2000, just two years before his death, a series of lucid talks by Eugene introduce us to some of his key concepts. Watching and listening to him, I am struck by his clarity of exposition – the workings of nature are described in the way that a clocksmith would detail the intricacies of a functioning clock. But what I liked most about Eugene was his downright, straight-talking take on ecology; evidently, jargon irritated him, and he would frequently chide the sophistry and obfuscation of academic ecology.

So what would he have made of ‘natural capital’, and the plethora of terms and caveats attached to it. I think its early days would have annoyed him, to say the least, but now we have much better descriptions of the concept and some excellent articles on the wider values of nature – see Ian Bateman’s excellent blog for example.

I think we are now at the stage where we need much more plain speaking about ‘natural capital’.   Whether we are thinking of soil, water or trees, we need to shift the dialogue to thinking about the goods and services we get from these. And there, I’ve fallen for it –‘goods’ and ‘services’ – two awful, off-putting terms. Surely we want to inspire people to think about the precious value of nature and the special and vital things it can do for us, and for nature itself.

I’m especially excited at the prospect of our being able to take what we know about habitat changes and translate this into values that reflect gains and losses. We lose wetlands and gain arable farmland; native woodland diminishes to give up heaths and rough grassland; and in the uplands we see the so-called homogenisation of vegetation, as commoner plants move in at the expense of the specialist mosses and lichens. All of these changes influence wildlife and landscapes. But that’s just the beginning of it, for with these shifts there will be all manner of consequences – for water quality, food production, appeal to visitors, and the sustainability of the ensuing landscape. Can we attach values to these changes in order that we can reach views on what it could cost, or would be gained, from encouraging some transitions at the expense of others?

This is a tall challenge. But then, none of this is so far from Eugene Odum’s view of life. To quote Ari Goldman’s obituary in The New York Times, Eugene ‘… saw the earth as a series of interlocking environmental communities, or ecosystems, each of which embraced ”a unique strategy of development.”’ What goes round, comes round, and the appeal of working on natural capital is that we have a chance to get more from what we have for the benefit of nature and people.