Entitled ‘GM crops and food security: curing the world’s growing pains?’, a debate led by Prof Rosie Hails, Chair of the NCI, on 21 January invited a packed room at the British Library to discuss the potential of genetic modification to contribute to a solution to the predicted food shortages in the next 50 years.

The evening was part of the TalkScience@BL discussion series, café scientifique style events establishing the British Library as a centre for current scientific as well as cultural debate.

Rosie focused her talk on the ecological impacts of GM crops, stressing the importance of management techniques, and the variable economic and social conditions into which GM crops are introduced, when assessing their effect on the environment. She urged the adoption of a more holistic viewpoint, considering not only biodiversity but of a whole suite of ecosystem services.

The audience, comprising members of the public, academics, industry representatives and food producers, then had a chance to comment and respond to questions raised in the talk. 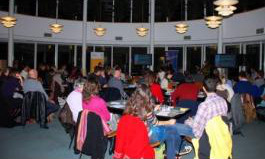 There was concern about the monopoly of GM technology for private profit rather than public good. The isolation of the GM issue from other agricultural technologies such as conventional breeding was criticised.

With many issues still to discuss and address, it is clear that GM technology will be a significant topic on the political agenda in the future.